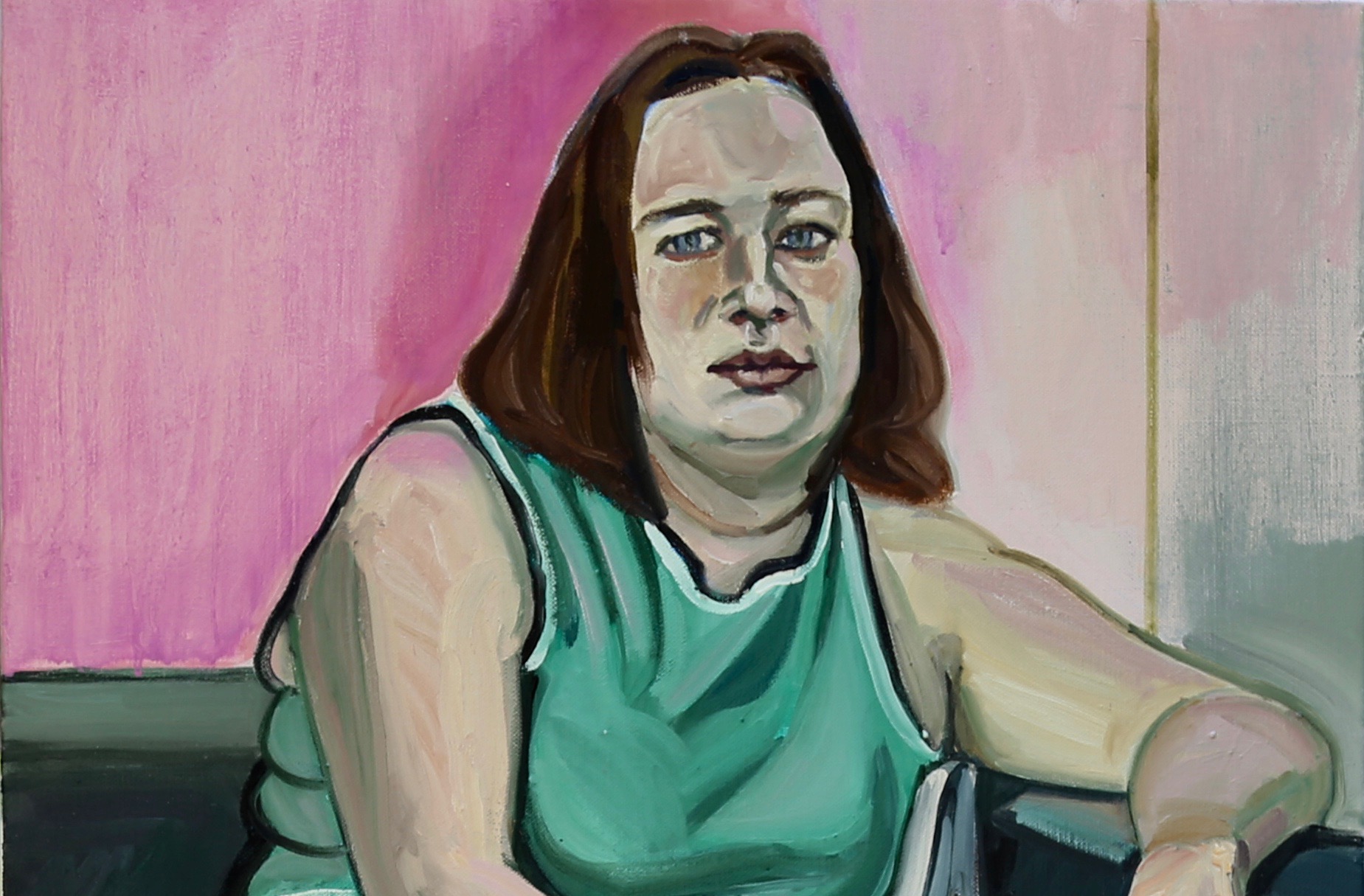 I met Juliet Jacques outside her wonderfully located apartment just off Portland Place in London. Stepping inside, it felt fresh and new, the light carpet spotless. Juliet wanted to keep it that way, so we removed our shoes at the door. She told me she had snapped this place up when everyone else was leaving London during Covid.

Juliet is a writer and filmmaker known for her work on the transgender experience. I was moved by her beautifully written and honest book, Trans: A Memoir. As I discovered, she is also a good conversationalist with a wide range of interests. I enjoyed hearing her talk about her great love of football, though I was somewhat out of my depth since I know virtually nothing about this sport.

After making us some tea, Juliet settled in for the drawing, choosing to sit on a black two-seater sofa with straight modern lines. She wore an emerald green sleeveless dress and black tights. I mentioned that I liked the little details in this arrangement, like the tights stretching over her toes and heels. Juliet assumed her pose with assurance, but had a wistful note in her eyes which I found strikingly expressive. There wasn’t much to include by way of background in the drawing, giving the composition an arresting simplicity.

Juliet was friendly but guarded. I sensed she was a little apprehensive about how I would portray her, but she reassured me that she had decided, when she agreed to be painted, she would accept the result. She spoke a little about her journey towards redesigned surgery, body dysphoria, and the different responses of her parents to her choice.

Later, when it came to working out the composition on the canvas, I liked the diagonal division the sofa created across the picture plane. It was a nice contrast to the other paintings in this project. By the time of the second sitting, I had the portrait at a stage where I was hoping only the face would need working on.

Juliet came to my studio on a fierce winter’s day in January. I turned the heaters on early, though I still worried about the temperature in light of Juliet’s sleeveless dress. To recreate the setup from the first sitting, I prepared the two-seater sofa in my studio, which is usually occupied by Liu, my black Labrador and studio companion. After giving it a thorough clean I had to stop him from getting back on, which left him looking rather confused and lost.

When Juliet saw my progress to date she remarked that her eyes looked melancholic. I worked on them a bit more, until we both thought there was less sadness in them. In general though, I tried not to overburden the face with detail, and was satisfied with my day’s work when Juliet left. Later I felt less sure, finding myself nipping back to the studio repeatedly to make adjustments, sometimes regretting it afterwards and sometimes rejoicing about the improvement.

This temptation to tweak constantly is one of the pitfalls of having my studio at home. It was an ideal arrangement when I was raising my family, since it allowed me to squeeze in some painting whenever I found myself with an hour spare. But living in such close proximity to my work makes it difficult to disengage, mentally and emotionally, and has led to a very solitary artistic life. I’ve always been jealous of the community enjoyed by artists who share a studio.

The background of Juliet’s portrait now looked a bit anaemic to me. The simple shades of black, green and pink no longer seemed bold enough, so I went back to the colour wheel – always a good place to start. I chose magenta, the complementary of green. Then I added more chroma, then less, then tried mixing Naples to the magenta, before scraping down again and concluding with magenta lightened by titanium white.

Two weeks later, I was not happy with this background either. Worse still, I could not act on my feeling because other plans and commitments had piled up in my schedule. I find this incredibly frustrating when there is work to do, and my desire to get back to the canvas nags at me constantly. Again the proximity of my studio becomes a problem: trying to steal a moment here and there for painting, I end up with stains on all my jumpers and jackets.

In the end I resolved the background in Juliet’s portrait by adding a darker section behind the head, almost reading as a shadow. By this time I regretted that I had been swayed by Juliet’s comment and toned down the pathos of her expression. But then, you can’t seal yourself off from people’s reactions to your work, especially the people you are representing. Portrait painters are accountable to their subjects in a way that other artists are not. 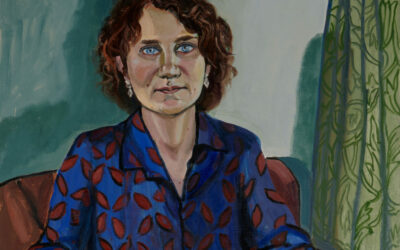 Lara Feigel’s Gloucestershire home lies in a maze of narrow country roads, snaking for an eternity through high, dense verges. Driving there in September, I almost felt like I had embarked on a... 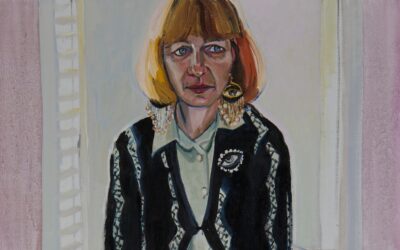 It was exciting to learn that Sacha Llewellyn had agreed to be part of this project. Not only is she a respected art historian, she also lives in Paris, so meeting and drawing her would give me an...

I found Dreda Say Mitchell’s house on a tree-lined street in Walthamstow, bursting with leaves in the early summer. Its emerald green front door swung open to reveal her inimitable welcoming smile....